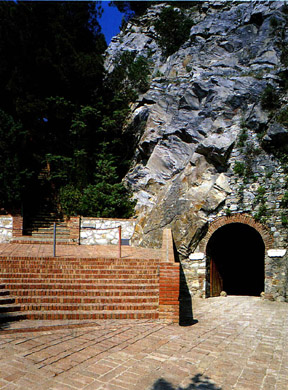 The Caves of Montenero are part of the Sanctuary of the Madonna di Montenero, a very important Sanctuary whose origins date back to May 15, 1345. On that day for the feast of Pentecost, tradition reports that a poor crippled shepherd found the miraculous image of the Virgin Mary and following an inner intuition, he took it to the Montenero hill, a place already known as a refuge for brigands and for this reason considered dark, gloomy … the “devil’s mountain”.

Known since ancient times, the caves were already a refuge for some hermits who welcomed the miraculous painting into custody.

Since then, a street called “Via delle grotte” or “La grotta” has existed near the Sanctuary. We begin to speak more accurately and in depth of the caves around 1920, when a firm of excavation for cimento marl obtains the concession for the extraction of the stone. In this period many caves are closed, others prolonged, others still opened from scratch.

Finally, from 1971 many works of rehabilitation, consolidation and arrangement of the sacred hill were begun; it was precisely during these works that caves that we no longer thought of finding came back to light.

In the course of these works it was possible to trace the presence of water that gushed from the living stone and that appropriate analyzes have declared drinkable and with good trace mineral characteristics.