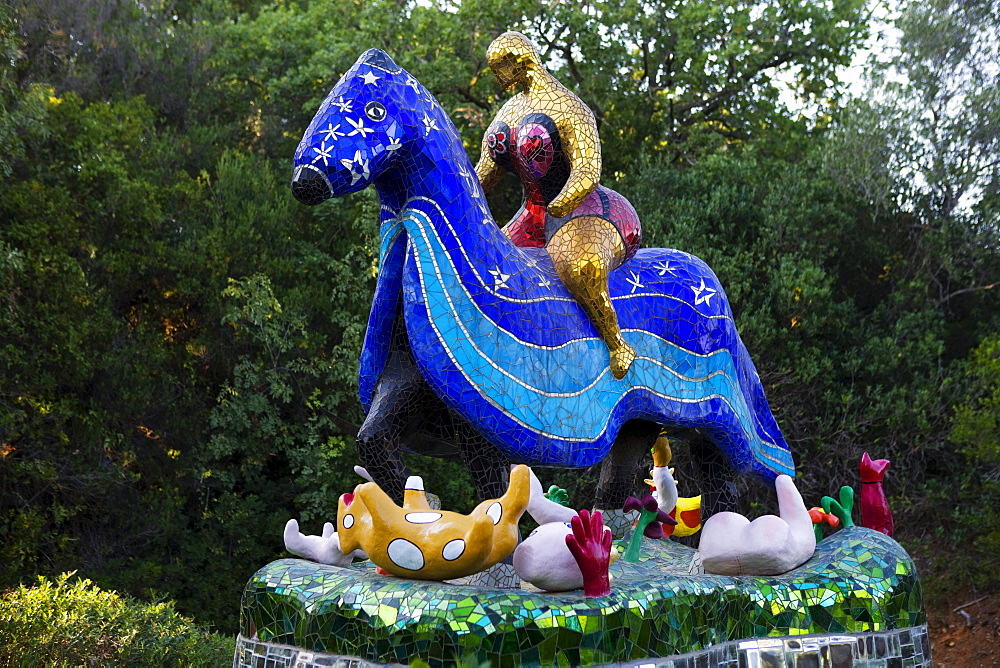 The giardino dei tarocchi is an artistic park located in the area of Capalbio, in Grosseto.
Open to the public since 1998, the route for tourists is made up of statues inspired by the figures of the major arcana found on the tarot:

The Path of the Giardino dei Tarocchi

The route starts from its entrance, where the figures of the Popess and the Magician, the first major arcana of the tarot cards, are located.

Continuing along the path, in the middle of the green you will find the Pierre Marie Le Jeune benches, the square with enchanting and poignant sculptures and a stairway with a waterfall that will show the great statue of the Popess from the open mouth , marked in the center by the wheel of fortune, a mechanical self-propelled sculpture.

Going forward with the suggestive path, we will see the concrete streets where the sculptor Niki de Saint Phalle has recorded his thoughts, memories and ideas … making the path not only artistic but also and above all spiritual.

A small staircase will pass under the figure of the Sun that is embodied in a fire bird perched in an arch that recalls the Indians of America.

Immediately afterwards we find the Pope , solitary and as a counterpoint we find “ The tree of life ” represented by the Hanging with its snake heads that cover it and in this we will find graphics and drawings of its creators and sculptors.

In front, a staircase that rises up to the Magician , blue with silver-colored stars, while to the right, with black and white games, we will find Justice , with the his scale where the interior space was barred and occupied by another mechanical work that represents injustice.

Going ahead with the path, along the concrete streets we find the statues of the lovers , joyful and full of colors, while they have a picnic in the woods while in the middle a small clearing, we will find isolated Prophet , a great ghost covered with mirrors.

We also come across the castle of the Emperor , a sort of citadel made up of towers and columns, with a beautiful fountain.

To the side of the castle, we find instead the Empress , previously closed to the public, which overlooks the square dominating the whole garden and made habitable; bedroom, kitchen and living room.
In its walls is the reflection of the figures of Judgment, Stars and Cart .

Returning to the path, we find a small dome of mirrors and cement surmounted by the figure of Temperance ; entering the dome you arrive at a dimension in which the known spatial parameters are lost, you will experience very strong sensations with figures and shapes that are continuously reflected.

On the outside, you will find a pitch with some of the sculpture-like chairs ; here you can rest and meditate on everything that surrounds you.

Going back, towards the Sun , an alternative path takes you to a sector of the garden composed of 3 small clearings where the Death rise, represented on horseback while mowing men at his feet, the Devil , with an uncertain sex, with his bat wings spread and 2 figures of men and women on the sides, The Crazy , a young man who symbolizes chaos.

Finally we will find the World , a machine that makes small spheres of light shine with a woman with open arms.

You will also find the figure of the Force , represented by a woman who holds under her control a Dragon tied to her by an invisible thread.

The Giardino dei Tarocchi promises a rich, unforgettable journey; impossible not to be fascinated by this nature which brings it completely into another dimension.

If you want to discover other fantastic attractions for your holiday in Tuscany, click here !